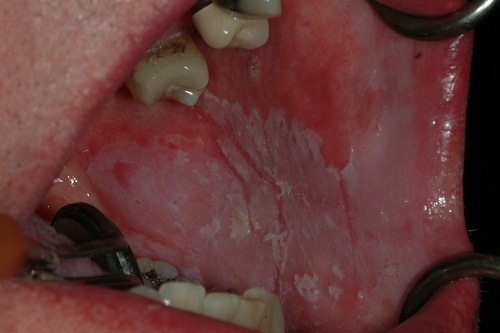 This is a 58-year-old white male who presented to his dentist with a 9-year history of widespread white lesions involving the left buccal mucosa, left mandibular gingiva and left lateral border of tongue.

Lichen planus (LP) would be a good disease to include on the differential diagnosis given the diffuse nature of this condition. However, LP typically presents in a symmetrical manner on the bilateral buccal mucosa and vestibule. However, lichenoid drug reaction may involve half the mouth. The lack of striation and reticular pattern makes this clinical presentation unlikely for LP. The histology was not supportive of LP.

Lichen planus is a common chronic immune-mediated disease affecting 2% of the population. It has a variety of clinical presentations, management, and predisposing factors that renders it a family of diseases rather than one entity with a specific treatment modality (1, 2). To be specific, lichen planus can be immune mediated, drug induced, associated with transplant rejection (also known as graft versus host disease), or associated with the galvanic effect (when two separate restorations are in opposite contact with each other). It has been suggested that it is associated with chronic liver failure, especially Hepatitis C. It is also seen in families (though rarely), and is known to undergo a malignant transformation in about 2.5% of cases. Given the versatility of this disease, it is difficult to apply one treatment modality for all presentations (2, 3).

The most common type of LP is the chronic T-lymphocyte-mediated disease where CD4 (early stage) and CD8 (later stages) T-lymphocytes are stimulated, releasing lymphokines, such as a tumor necrosis factor, which lead to the destruction of the cells in the basal and parabasal cell layers (2). This type of oral LP tends to come and go, sometimes lasting a lifetime. Lichen planus of the skin usually resolves within 1-3 years while only 20% of oral LP cases resolve in that period of time. Lichen planus occurs in adults between 30 and 70 years of age with a strong female predilection (1-3). It is often associated with stressful lifestyles. Skin LP presents as purplish, pruritic papules with a white keratotic surface, commonly on the flexor surfaces of the wrists, trunk and the genitalia. Oral LP presents as keratotic and reticular (the reticular pattern is the most common type), atrophic or erosive (the erosive type is the most important clinically), or plaque-like (the hypertrophic type, which is the least common). Oral LP presents most commonly in a symmetrical manner on the bilateral buccal mucosa, followed by tongue and gingiva. Reticular type LP is asymptomatic and presents with interlacing lines against an erythematosus bluish background; the lines are known as the striae of Wickham. Erosive type LP, on the other hand, is symptomatic—patients complain of sensitivity to hot and cold, spicy, acidic, and alcoholic food and beverages. Erosive LP also presents in locations similar to those of the reticular type. At times, erosive LP can be hard to distinguish from other mucocutaneous diseases such as benign mucous membrane pemphigoid (BMMP) and pemphigus vulgaris (PV). Hyperplastic or plaque LP is uncommon and presents as a confluent white plaque that is often mistaken for leukoplakia. The hyperplastic type is more common on the dorsal surface of the tongue, gingiva, and palate, making a clinical diagnosis of LP difficult, especially if the patient smokes. LP can also present on the gingiva alone as a thin and atrophic lesion known as desquamative gingivitis. The clinical differential diagnosis for desquamative gingivitis should include mucous membrane pemphigoid and pemphigus vulgaris.

A discussion of LP would be incomplete without addressing Lichenoid Drug Reaction, a condition that is especially common in elderly patients. It most frequently presents as erosive lichen planus on the bilateral buccal mucosa. It is associated with the ingestion of a number of medications including antibiotics, antihypertensive drugs, allopurinol (gout), diuretics, antidiabetics, gold, mercury, antihistamines and many others. The malignant potential of oral LP is a significant clinical concern, especially in long-term erosive lichen planus patients; transformation in reticular LP has also been documented, albeit rarely (4). The World Health Organization (WHO) defines oral LP as a precancerous condition (5) with the full understanding that the risk for transformation is only around 2.5%. The locations of transformation are not in the high-risk locations of conventional oral SCC, but rather involve the buccal mucosa, tongue and gingiva— the same locations as the conventional lichen planus.

Lichen planus is a disease that requires examining both clinical and histological features in order to arrive at a definitive diagnosis. Depending on the LP type, the epithelium ranges from thin and erosive to thick and keratotic (2, 3). All types have a band-like infiltrate of T-lymphocytes. The basal cell layer shows evidence of degeneration; rete pegs are or are not present, the basement membrane zone is thickened, and cytoid bodies (Civatte bodies) may be present. The immunofluorescence (IMF) features include positive staining with antibody to fibrinogen present along the basement membrane. Treatment ranges from no treatment for the asymptomatic reticular type, to topical steroids, intralesional steroid therapy (rarely used), and systemic steroid therapy (if the condition is severe such as in erosive LP). The best treatment for lichenoid drug reaction is replacement of the causing medication with a substitute. Treatment for transformation would follow the criteria for the treatment of oral epithelial dysplasia and squamous cell carcinoma.

Smoker’s keratosis should be among the many oral changes associated with the use of tobacco (6), specifically smoked tobacco. In a study in Pakistan which examined the normal gingiva of 16 patients, smokers were found to have more epithelial keratosis in general than non-smokers (7). Smoker’s keratosis is most common in middle-aged males and appears as a white lesion, ranging in texture from smooth to rough to verruciform, usually occurring in the buccal mucosa, mucobuccal fold and/or floor of mouth. Histologically, the lesions range from benign hyerkeratosis and acanthosis to various grades of epithelial dysplasia, and to invasive squamous cell carcinoma. Treatment depends on the histology and the clinical presentation. It may range from cessation of tobacco use (which may lead to the reversal of the white lesions) to surgical or laser excision.

Frictional keratosis can affect patients of any age with no gender predilection. It is commonly found in younger patients involving the lips, cheeks, and lateral tongue. On palpation, it ranges from smooth to rough, irregular and leathery in consistency. Histologically, it is made up of hyperkeratosis, usually with superficial bacterial colonization. The spinous layer is usually hyperplastic and the connective tissue may or may not be inflamed or fibrotic. The treatment of choice is removal of the irritating factor. It is best to biopsy if the lesion persists. It is also important to keep the patient on regular follow-up visits and re-biopsy if the lesion changes to red, ulcerates, or grows larger.

Candidiasis is an opportunistic infection; it can occur even in non-compromised patients and usually on the tongue, skin folds, vagina and urinary tract. It usually occurs in compromised patients, especially in the GI tract, lungs, heart valve, kidneys and meninges (8-9). It is caused by Candida albicans, which presents in the form of delicate pseudo hyphae and budding spores. Candida is normally found in the oral cavity, in up to 50% of the population (8). It affects high-risk patients for lack of immunity such as infants under six months of age, pregnant females, debilitated patients with chronic diseases, uncontrolled diabetics, patients who are immunosuppressed, and patients on long-term broad-spectrum antibiotics and steroids. It is classified into acute and chronic types. The acute type includes the acute pseudomembranous type, found in chronically ill patients and infants (9). It presents as white, soft, slightly elevated plaques on the buccal mucosa and tongue. It can be wiped out leaving a relatively normal appearing mucosa, or slightly red mucosa. The acute atrophic type is erythematous and painful. The chronic type includes chronic hyperplastic candidiasis which is a firm, white, persistent plaque on the lip, tongue and buccal mucosa. It is difficult to wipe off. In terms of histology, besides candidal hyphae there is hyperparakeratosis, acanthosis and chronic mucositis. A biopsy would show hyphae and spores, and a cytology smear is just as effective. Treatment includes Nystatin suspension for oral lesions. If the patient does not respond to treatment, check for diabetes, AIDS, or other endocrinopathies and immune suppressive diseases (8-9).

Given the diffuse and rough features of this lesion, it is reasonable to include white sponge nevus (WSN) on the differential diagnosis. However, WSN is a childhood disease and is typically associated with family history, both of which conditions do not fit this case. The histology is also not supportive of WSN.

Cannon first coined the term “white sponge nevus” in 1935 (11). Today, it is identified as a genetic disease caused by a point mutation in cytokeratin types 4 and 13 (12). This is a rare hereditary autosomal dominant condition that predominantly affects the non-keratinized mucosa including the oral cavity, nose, esophagus, vagina and rectum. The oral mucosa is more frequently affected. It is of variable penetrance (10). Although it typically occurs before age 20, it may occur at birth or during childhood or late adolescence (12). White sponge nevus can be mistaken for other types of leukoplakias. The history indicating the presence of these lesions since childhood combined with a family history and the characteristic histology are adequate in rendering a definitive diagnosis (12). Clinically, WSN presents as white, folded plaques that can peel away. The spongy mucosa can look translucent, simulating leukoedema. It can occur anywhere in the oral cavity but most commonly on the buccal mucosa followed by the lips, floor of mouth and the alveolar ridge (10). Histologically, the epithelium is thick and is covered by a thick and shaggy parakeratin with keratin plugging and intracellular edema of the spinous layer and condensations around the nuclei in the upper spinous layer. No treatment is necessary. It has an excellent prognosis.