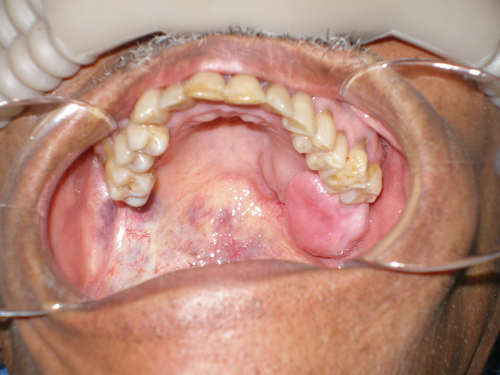 This is a 69-year-old gentleman referred by Medical Teams International for evaluation of a large left maxillary mass (Figure 1).  He reports that the lesion has been present for eight to ten years and occurred just after removal of tooth #16.  The lesion has been slowly growing.  It is not painful and it does not bleed.

Given the eight- to ten-year period of slow growth, the clinical features demonstrating an exophytic lesion with a smooth surface, and the lesion’s appearance after tooth #16 was extracted, it would be logical to consider the lesion benign and, especially, to think of a reactive process such as an inflammatory fibrous hyperplasia (IFH). The histology in this case, however, is not supportive of IFH.

Inflammatory fibrous hyperplasia or fibrous hyperplasia is a benign soft tissue response to a local irritant (1-3). In case of epulis fissuratum (a variant of IFH), the local irritant is an ill-fitting denture (3). Other types are due to calculus, a sharp tooth, or a broken filling, excessive plaque and other irritating factors (1-3). In this case, it may represent an irritation caused by the extraction of tooth #16 since the history indicates that this lesion occur soon after tooth #16 was extracted. Inflammatory fibrous hyperplasia occurs at any age with no sex predilection. Epulis fissuratum occurs mostly in adults with no sex predilection (3). Fibrous hyperplasia clinically presents as a well-demarcated exophytic mass (1-3). The color ranges from normal to white or reddish depending on whether or not the surface is ulcerated, keratotic, both or neither (1-3). Epulis fissuratum presents as a redundant and hyperplastic tissue in the alveolar vestibule. Inflammatory fibrous hyperplasia can be soft or firm to palpation. Histologically, IFH is made up of a mass of hyperplastic connective tissue with dilated blood vessels, usually with chronic inflammatory cells such as lymphocytes and plasma cells, but it can also be made up of solid connective tissue with minimum to no inflammatory cells; the latter is called fibrous hyperplasia (1-3). The surface epithelium ranges from normal to acanthotic, ulcerated, keratotic, or a combination of two or more of these features. Removal of the local stimulant and conservative surgical removal are the treatment of choice (1-3).

Given the location of the lesion on the posterior and lateral hard and soft palate, salivary gland neoplasms should to be considered. Given the history of eight to ten years’ duration of the lesion, pleomorphic adenomas (benign mixed tumor) would be the most likely salivary gland neoplasm. The histology, however, is not supportive of pleomorphic adenoma but is supportive of adenoid cystic carcinoma.

Adenoid Cystic Carcinoma (ACC) Adenoid cystic carcinoma is a malignant neoplasm of epithelial salivary gland origin, predominantly of basal and myoepithelial cell origin. It occurs in minor and major salivary glands, including the parotid, submandibular, palatal, lacrimal, pharynx, laryngeal, skin, and breast glands among many other locations. It accounts for 4% of all salivary gland neoplasms and 7.5% of all epithelial salivary gland malignant neoplasms (9). There is no consensus in the literature on the most prevalent malignant salivary gland neoplasm of the oral cavity; some suggest adenoid cystic carcinoma to be the most common, while others show that mucoepidermoid carcinoma is the most common and yet a third group of reports suggest that polymorphous low grade adenocarcinoma is the most common (9, 11). It is not the intention of this author to favor any of these reports, but rather to state that mucoepidermoid carcinomas (first) and adenoid cystic carcinomas (second) are more frequently diagnosed in our biopsy service than polymorphous low grade adenocarcinoma.

ACC occurs more commonly in middle-aged patients in the fourth to the sixth decade of life. However, it can occur in patients of all ages with slight predilection for occurrence in females. Although cases in the first decade and the tenth decade have been described, these extremes tend to be rare (9, 11-12). According to the AFIP’s records of their own diagnoses of ACC, 26.8% of cases occur in the parotid, 24% in the submandibular gland, 20.5% in the palate, 5% in the tongue, around 4% each in the lips and buccal mucosa and 1.2% in the sublingual gland (13).

Adenoid cystic carcinoma is a slow-growing neoplasm, persistent in growth and recurrence with a slow tendency for metastasis. It may present with local pain and facial nerve paralysis if affecting the parotid. Fixation to deeper structures and local invasion is common in the larger lesions. ACC of the palate may be covered with normal mucosa, making it indistinguishable from a benign salivary gland or soft tissue neoplasm. It may also be ulcerated, especially in larger lesions. It has a marked tendency for perineural invasion explaining the signs of pain or paresis (9-13).

Multiple genetic aberrations have been identified; one involves the loss of DNA copy number in chromosome 12q, and another involves deletion in 6q23 and 13q21 (10). Others show gain in chromosome 19 and deletion of chromosome 19q. Another study showed similarities in genetic abnormalities between adenoid cystic carcinoma and polymorphous low grade carcinoma involving chromosomes 12 and 6. These two malignant salivary gland neoplasms have other common clinical and histologic characteristics, making it difficult at times to differentiate between them.

Histologically, ACC is made up of infiltrative small, dark, uniform and basaloid cells with or without mitosis depending on the type. Three types have been described: cribriform pattern, solid pattern and tubular. Combinations of the three types are sometimes encountered in one neoplasm. Cribriform pattern is the most common type and is arranged in clusters and nests of epithelial cells with holes (spaces); hence, it is also known as a “Swiss cheese” pattern. The neoplastic cells are small, basaloid and uniform with little to no mitosis and no pleomorphism. It is clinically low-grade, behaving with multiple recurrences and a slow tendency for metastasis. The high-grade counterpart is also known as the solid type, where cells are arranged in nests with larger basaloid cells, pleomorphism and prevalent mitosis. Spaces within these clusters are usually scant or absent. This is a more aggressive type with a tendency for early metastasis. The tubular type is difficult to interpret since some believe it is similar to the cribriform pattern in behavior. All three types have a tendency for perineural invasion (9-13). Complete surgical removal with wide clean margins of surrounding tissue is the treatment of choice. The patient elected to use a partial denture prosthesis with obturator. If there is histological evidence of perineural spread, nerves may be surgically followed to the skull base. Surgery combined with radiotherapy has been used, especially with recurrence or with surgical specimens involving the surgical margins. Radiotherapy alone has been used, but not effectively. Chemotherapy is used with metastasis. Prognosis is based on the clinical stage as well as the histology. Stages 1 and 2 have a much better 10-year survival rate than stages 3 and 4 (75% stages 1 and 2, 43% for stage 3 and 15% for stage 4). Histologically, the cribiform pattern has a better prognosis than the solid type. One study showed the 15-year survival rate for cribriform-pattern cases to be 39%, compared with a 5% survival rate with the solid variant. The latter measured by tumor histologically made up of 30% solid ACC. These tumors tend to invade bone and metastasize to the lung. Because of the tendency for multiple recurrences and possible metastasis, long-term (20 years or more) follow-up is mandatory (9-13).

Given the eight- to ten-year period of slow growth and the clinical features demonstrating an exophytic lesion with a smooth surface, it would be reasonable to consider a diagnosis of a benign neoplasm, including soft-tissue type neoplasm such as of neural or smooth muscle origin. The histology, however, is not supportive of any soft-tissue neoplasm.

Soft-tissue neoplasms include those of nerve, muscle or fat origin. For this clinical presentation, neurofibromas, schwannomas and leiomyomas would be the most likely soft tissue neoplasms to consider. All of the aforementioned can occur on both the anterior and posterior hard palate (1, 4-8). Neurofibroma would be the most common peripheral nerve neoplasm (1, 4-5) and can be an isolated lesion or multiple lesions as part of neurofibromatosis syndrome. It is more common in young individuals and is most commonly located on the tongue (4-5). It can, however, occur on both the hard and soft palate areas. Schwannoma is also a benign neoplasm of peripheral cell origin (1, 4, 6). It is slow-growing and is usually asymptomatic but can occasionally be painful (1, 6). Again, the tongue is the most common location but it can occur in the hard and soft palate areas (1, 4, 6). Leiomyoma is a benign neoplasm of smooth muscle origin that is very rare in the oral cavity (1, 7-8). The origin of oral leiomyomas is usually in blood vessels; therefore, the lesions tend to be grey-blue in color while the solid-type leiomyomas are pink (1), the same color as the surrounding mucosa. They are slow-growing, firm and asymptomatic. Occasionally, they can be painful (1). The most common location for leiomyomas are lips, tongue and palate (1, 7-8). All of the lesions mentioned in this category can be ruled out based on the histology.